HOLLY AND THE MILLIONAIRE - speed blogging 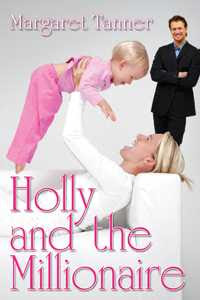 Drinking her virtual glass of champagne with us today is Margaret Tanner, the author of HOLLY AND THE MILLIONAIRE (The Wild Rose Press). Because my own book is under contract with the same publisher, and because the title aroused my curiosity, I asked Margaret to speed-blog with us today.

(You've never heard of speed-blogging? It's like speed-dating, only you make your appearance as a guest on somebody's blog, and your post is as brief as a speed-date.)

1. Welcome, Margaret. Quick! Sell us your book in less than 10 words:
Will Holly take a chance to find love again?

2. How did you come up with title?
I wanted the title to tell the story.

3. What made you write this particular book?
I was on a plane flying home from England when I read an article in the paper about young widows losing their soldier husbands in Iraq, and how they coped with their loss.

4. 3 reasons your book would make a great Christmas present.
It looks pretty. Is easy to post. Not too expensive

5. Your book Hollywood. Which actors would you like to play your hero/heroine? has made it to Which director would you just love or hate to get?
Hugh Jackman – Cate Blanchett. An Australian director would be great.

6. 5 short facts about yourself as a writer and person.
- I am married with 3 grown up sons and one wee grand daughter.
- I live in Australia.
- I love writing and meeting up with my writer friends.
- My favourite genre is historical romance.
- I have two publishers Whiskey Creek Press and The Wild Rose Press.

Thank you, Margaret. How was that for you, LOL.
Now, the blurb and the excerpt.
BLURB: HOLLY AND THE MILLIONAIRE
Fleeing from her ruthless English in-laws who are intent on stealing her child, Holly Kirwan boards a flight home to Australia and meets Justin Devereux. They are instantly attracted to each other.

Justin doesn’t want a permanent woman in his life, particularly one with a baby in tow. Holly, still grieving for her soldier husband who was killed in Iraq, doesn’t want to be disloyal to his memory.

Can the young widow and the commitment shy tycoon ever find happiness together?


EXCERPT:
Heads would roll over this debacle Justin Devereux fumed as he strode on board the aircraft. If he hadn’t needed to get out of England so urgently he would have waited for another flight and to hell with being caught up in blizzard.

He showed his ticket to the flight attendant. He could well understand why some people referred to economy as cattle class. He hadn’t flown this way in years and wouldn’t be doing it today either, if he had any say in the matter.

“I’m so sorry about this mix up, Mr. Devereux. The airline did everything it could to get you a last minute business-class seat, but like first class, it was completely booked out.”

Well you didn’t try hard enough, he nearly said but bit back the angry words. It wasn’t the flight attendant’s fault that his booking was still floating around in cyberspace because of someone else’s incompetence.

“We were able to get you an aisle seat near the front.”

“Thank goodness for that at least.”

On being shown to his seat, he took off his cashmere coat, folded it neatly and stowed it in the overhead locker. If he had even an ounce of luck the seat beside him would remain empty, but he wouldn’t take bets on it. Setting his briefcase on the floor, he rested his laptop on the vacant seat. What a shocking few hours it had been.

At least it was a little more spacious here. He couldn’t understand why there was extra leg space and only one other seat, when there would be normally at least three, sometimes four seats jammed together.

Closing his eyes he thought back on the last twenty-four hours. Deanna and Simon had betrayed him. He didn’t care so much about Deanna dumping him for Simon as their relationship had just about run its course.

Running off with millions of dollars of his employees’ pension funds? Now that was something else. Despicable, criminal, and they did it in such a way that the blame literally fell on him. He was ruthless. He had to be to attain the position he held today as one of Australia’s richest men, but he had always acted with integrity. There were only two choices in the short term. Risk tarnishing his good business reputation or discreetly pay the money back. He chose the latter.

I’ll hound them to the ends of the earth, he vowed furiously. I don’t care how long it takes. No one cheats Justine Devereux and gets away with it.

“Hell,” he yelped as something hard and sharp rammed into his groin. His eyes flew open. God, someone was trying to castrate him.

Justin looked up into a pair of blue eyes that were swimming in tears.

“Here, let me help,” he growled, pushing the weapon away from his crotch and handing it back to her. It’s a wonder they even let her bring the thing on board. She took the folded-up baby stroller but dropped a large pink bag on his foot. Where were the attendants when you needed them? This was definitely going to be the flight from hell.

Hi Yvonne,
Thanks for inviting me to your blog for an interview. I enjoyed our chat very much. It's great that you are going to be a TWRP author too.

This is a really cute interview, Margaret, and the book cover is adorable. Also, as you know, I do love a chance encounter on an aeroplane!

Nice interview, Margaret. I'll have to look up your book. :-)

I never heard of speed blogging before but it was certainly easy to skim through. I enjoyed the excerpt very much Margaret!

Hi Everyone,
Thank you so much for dropping by and leaving such nice comments, I appreciate it.

I'd not come across speed blogging either! What a good idea, Yvonne. And what a great interview, Margaret!!

I think speed blogging is the hit of the party. :) And Margaret, you gave concise yet informative answers. Awesome blog!

Great post, Margaret. I love the excerpt and intend to buy your book eventually. You know I'm a fan from the snippets I read, but the darn economy has my purse filled with lint rather than money. And I don't even have any rich relatives that might pass on and leave me anything. Drat the luck. :)

Hi Christina, Jacquie and Ginger
thank you so much for dropping by, I appreciate you taking the time to comment. Also Lindsay, Francesca, Maggie and L.K Hunsaker thanks for the support.
Yvonne. A big thanks to you also.