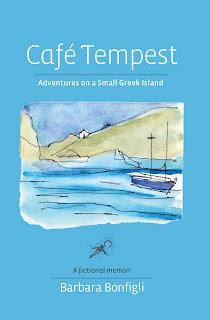 What is it about Greece that makes it so exotic, so romantic, so tantalizing that it’s right at the top of everybody’s bucket list – the one foreign land they’re longing to visit? Our dreams are made on Never on Sunday, Zorba the Greek, and more recently My Big Fat Greek Wedding and Mama Mia.

Café Tempest: Adventures on a Small Greek Island is a witty, evocative, beautifully written novel that puts you right in the heart of Greek island life. It’s so alive with the sights and smells and tastes and characters of Greece that you can pick it up and start your Mediterranean vacation on page one. On a deeper level, the book is filled with the kinds of observations, reflections, and arc of self-discovery that make Eat, Pray, Love so compelling.

“Welcome to Pharos. Laugh and dance in the hammock—not the cradle—of Western civilization,” says author, lyricist, and theatrical producer Barbara Bonfigli. “I’ve been falling in love with Greece since I was old enough to drink retsina. But if Sarah hadn’t captured my imagination you’d never know how I feel about friendship, feta, and the abundance of grace that turns friends into lovers and fishermen into kings.”

When Sarah, a thirty-something American theatrical producer, is asked to direct the locals in their summer show, she picks Shakespeare’s play The Tempest. What follows is a hilarious adventure in casting, rehearsing, and consuming. Her neighbors are excited about acting but delirious about eating. Their rehearsals in a deconsecrated church become a feast in four acts.

Armed with a sizzling wit, a dangerously limited Greek vocabulary, and a pitch-perfect ear for drama, Sarah navigates the major egos and minor storms of a cab driver Caliban, a postmaster Prospero, and a host of fishermen dukes and knaves.

When she falls in love, there are even trickier seas to navigate. Her own offstage romance provides an exhilarating, unpredictable counterpoint to Shakespeare’s story of magic, intrigue, and the power of love.

[from Chapter 23, edited for length. Sarah, the novel’s main character, is an American theater producer spending several weeks on Pharos, a rustic idyllic Greek island. This evening, she’s at a taverna –owned by Dmitri --with her friends Alexandra (Alex) and Petros, and Petros’ new Swedish girlfriend Monika]

“I love these fish places,” says Monika. She’s wearing a halo, the sun having bleached her blond hair river gold. Below that is a black-and-white Joffrey Ballet T-shirt tucked into black hipsters; the dancers are pas-de-deuxing over Monika’s small unsupported breasts.

“But you must have the same thing in Sweden,” says Alex, who’s chosen the poor-fisherman-dangling-threads look tonight.

“Lots of places that serve fish, but they don’t have this atmosphere. Even the outside cafés there are all . . .” Monika makes a sour face that does nothing to dim the voltage. “. . . modern.”

“Dmitri thinks this is modern,” says Petros, raising his arm off the back of her chair, “covering the lights with fishnets.”

“Mykonos fifteen years ago,” I recall.

“Do you think Pharos will be spoiled?” Monika addresses this directly to me. “No,” Petros answers for me, “no airport, no discos.”

“Music? You like music? We have.” Dmitri has appeared with his order pad. “Tomas has coffee, then he plays.”

We’re in luck. Tomas the shipwright is a terrific fiddler, and his younger brother Takis plays wizard bouzouki.

“You eat something?” asks Dmitri.

“Me too,” says Monika in English.

Petros contracts slightly. “But the specialty is octopodhi . . .” He looks from face to determined face. “Well, I’ll have it. And a pitcher of your house white.”

Except Dmitri’s house white will take baked-on bugs off your windshield.

“Dmitri,” I say, arresting him, “let’s have a bottle of retsina too.”

Dmitri brings a collection of mezedes [appetizers] with the retsina and we dig in.

“Yasoo, Sarah!” Iannis the postman slaps a letter on the table, “I lose a few days,” and departs.

I inspect the envelope closely: “God, it’s more than a week old.”

“A week old? Isn’t he the postman?” Monika asks. She’s new here, and from the north.

“The what principle?” Petros says.

“It’s a theory that describes why nothing works very well,” she says. “The idea is that when people are good at their jobs, they get promoted. Till they finally rise to their level of incompetence. And that’s where they stay. So no one’s really good at what they do.”

“The author’s name was Peter something,” I add, turning to Petros, “so think of it as the Petros Principle.” Petros looks pretty miserable. Sometimes irony doesn’t leap the cultural divide.

“It’s just an amusing idea,” I say. “If it were always true we’d never have walked on the moon.”

“Why are we walking on the moon?” says Alex.

Tino’s wife has made fresh tarama,[fish roe salad] and the feta is soft and sweet.

“Let’s get some more tarama and pita,” I say.

“Even the retsina’s good,” says Alex, dropping the moon. “Can’t we give up and come here every night?”

To learn about Barbara Bonfigli and Café Tempest, feel free to visit any of these sites.

Order Café Tempest directly from the publisher - http://www.tellmepress.com/pub_ct.php or from Amazon http://www.amazon.com/Café-Tempest-Adventures-Small-Island/dp/0981645313

The Seventh Taboo - a sweet SF romance with a rave review!

"The Seventh Taboo", a sweet SF romance with a rave review!

You know he is somewhere out there. Your soul mate. Your other self. All you need to do is find him and you'll feel complete the way you've never felt complete before.

Except that finding him is strictly forbidden.

Finding him would break the Seventh Taboo.

And then, one night, you meet him. Every hormone and every cell in your body shouts that he's the lost half of yourself you've been searching for. Your logic disagrees. Which are you going to believe? The primeval instinct or your training? Your heart or your mind?

To what lengths will you go, what risks will you take, to prove to yourself that he is the one?

Posted by Yvonne Eve Walus at 1:51 pm No comments:

Fiji on Fire, Fiji on Ice

Posted by Yvonne Eve Walus at 11:50 pm No comments:

Thriller... no, not the Michael Jackson song!

I never used to read thrillers. They used to be thick books written by men who liked ticking bombs, political plots and weapons of destruction (mass or otherwise). They used to be thick books written by men who thought saving a nation was more important than saving a five year old girl the readers have come to know and love. They used to be BORING.
Thriller authors must have realised that they were writing for a very narrow market (after all, there are a lot more female than male readers out there), and subsequently they adapted.
Regular readers of this blog will already know about my love for Harlan Coben books (not to mention his Win creation), so today I'm going to talk about somebody not quite so famous, but equally good: a contemporary South African thriller writer, Deon Meyer.
Meyer writes in Afrikaans, and even though my command of the language is not perfect, I love the books so much I refuse to wait for the translations, so I read the originals. But translations exist and sell well. Have a look on amazon for... hand on, let me check what the English title is... something about the hunter... ah, yes, Heart of the Hunter.
Buy it.
Read it.
Go back for the other titles. They are worth it.
Posted by Yvonne Eve Walus at 12:50 pm No comments:

Curses on the person who introduced me to Kona coffee! It really is quite superior coffee, particularly the rounder peaberry variety (which roasts more evenly). If I had to choose between Blue Mountain and Kona... hmm... I'd take both.
The trouble is, not only is it more expensive than my local brand, the cost of shipping it halfway around the globe surpasses the cost of the beans themselves!
Anyway, here is a competition to win a bag of Kona beans: simply click on this link: http://www.coffeetimeromance.com/ContestPage.html and scroll down to Eve Summers.
It's worth it!
Posted by Yvonne Eve Walus at 11:38 pm No comments:

Email ThisBlogThis!Share to TwitterShare to FacebookShare to Pinterest
Labels: contest

Echelon Press is running a special on "Ghost Light" (see the post below for more info on the book itself):
Buy "Ghost Light," by award-winning 'tween author, Mary Cunningham (Cynthia's Attic Series), and receive a free PDF (download) copy of "Cynthia's Attic: The Missing Locket."
Click on the link to take advantage of the offer: http://echelonpress.com/index.php?main_page=page&id=6. The books are fabulous and you won't regret it!
Posted by Yvonne Eve Walus at 1:28 pm No comments:

Email ThisBlogThis!Share to TwitterShare to FacebookShare to Pinterest
Labels: special

11-year-old Jake McMillen wants, more than anything in the world, to play varsity basketball for the Corydon Panthers, just like his late, Grandpa Max. One big problem. While Jake inherits his grandfather’s love for the game, the McMillen height passed him by.

Not only that, being dragged along to his grandmother's steamy apartment cuts into the afternoon pick-up game at the Island basketball court.

After getting totally humiliated during the game by star player, Quinn Parker, Jake gets a ghostly message that changes his outlook toward his grandmother, and inspires him to pursue his dreams.

Having grown up in Indiana, author, Mary Cunningham’s love of basketball inspired her to write “Ghost Light”

In addition, she is the author of the award-winning 'tween fantasy/mystery series, Cynthia’s Attic. She is proud to announce book four, Cynthia’s Attic: The Magician’s Castle, is due for release in December of 2009. Her children’s mystery series was inspired by a recurring dream about a mysterious attic. After realizing that the dream took place in the attic of her childhood friend, Cynthia, the dreams stopped and the writing began.

She is also co-writer of the humor-filled lifestyle book titled, "Women Only Over Fifty (WOOF)."

Posted by Yvonne Eve Walus at 12:08 am No comments: