LOST FINALE REVIEW: SPOILERS!!!!
LOST, the final episode. I loved the character development. I didn't care about the unresolved mysteries. But as soon as I realised the "sideways" or "LA X" reality was a sham, I felt cheated.
I felt cheated. As she was dying, Juliet said "it worked". This was reinforced a few episodes before the finale, when Miles did his speaking to the dead routine. It worked, he said. That's what the whole final season was about, that it worked. It didn't. A video review points out that when Juliet said "it worked", she meant the candy machine (the "enlightenment" scene with Sawyer in the last episode). I would have said "what a long con", only it would be besmirching to Sawyer, so I'll say instead "what a cop-out".
I felt cheated. I got a glimpse of the way life could have been for these people if only Jacob hadn't messed with it, and, having done his dirty work on the island, having completed their save-the-world mission, they deserved a chance to have that original way of life back, with all their island memories switched on so they remember every day how lucky they are to live their happy HERE-after. Instead, their grand prize was a waiting room.
I felt cheated. Just as it was imperative for the actions taken in the Island Reality to influence the final resolution, so should the actions taken in the Sideways Reality have mattered. Switching on their memories should have helped good overcome evil in the Island Reality.
Speaking of good overcoming evil, I felt cheated. Other reviewers have put it eloquently enough (see the 2 paragraphs beginning with "I was especially disappointed when Kate killed MIB...", then the comment Steven Says "What I took away from this, is if I ever get into a fight with a creature made of spirit possessing no body..." and WarnaBrutha's comment "An alternate version of the fight scene...").
Look, I still loved every 120 or so (somebody else on the forums did the maths) of the hours I spent watching LOST. The characters were iconic. The mysteries mind-blowing. It was fun to keep track of the timelines. But did I mention how, at the end of it all, I felt cheated?
PS: I love this alternative interpretation (although emotionally crippling, it's actually much more satisfying from a writer's perspective):
Damon Says:
May 25th, 2010 2:01 AM

You guys just don't get it. Did you even watch the show? Some of you seriously need to go back and watch it again if you did. It was clear that they didn't die when the plane crashed. The island was real, and the losties created there own after-life get-together so they could be with the ones that were most important to them. At least that's what they thought. The twist was that in the church Christian Sheppard was actually the smoke monster. He took old-man Sheppard's body as he had done many times before throughout the series. It was his way of getting even with the losties for all the trouble they put him through -- his long con. After Jack kicked Smlock off the cliff, they thought he was dead. Well, wasn't it odd that a creature that lived hundreds of years and could withstand bullets and everything else and turn into smoke was so easily beaten by Jack and Kate. He didn't really die. When the losties weren't looking, Smokey left Lock's body. When the losties all eventually died and went to their after-life gathering, little did they know that Smokey was there as well -- he had found another loop-hole. That's why Christian's body wasn't in the coffin, just like in the early episode when Jack found the coffin in the woods without the body and then saw Christian, who was actually the smoke monster. At the gathering, Smokey was misleading them into believing that they were "moving on." Nothing he said was true. Instead, Smokey was ushering them into a fate "worse than death." Didn't you see the light from the door he opened? It was the light from the cave. They never really left the island. The sideways world was not in L.A. It was something they created after they died on the island. No one ever left. It was a perfect ending. It was true to Lost being about the duality of man. Good versus Bad. Light and Dark. But with no clear winners and losers. The thing is, we never saw the losties walk into the golden light, so we don't know if they did. Perhaps they didn't fall for Smokey's trap. But then again, maybe they did. Now I know some people think the smoke monster snuck on the plane when Miles and Richard were fixing the wiring and that the plane took off before Jack corked the hole in the cave so Smokey possibly got off the island like he said he would. If he did, then maybe the world (and the island) were destroyed, which explains the island being at the bottom of the sea. I guess that's possible. It's all up to how you see it. Best show ever. (http://www.tvfanatic.com/2010/05/lost-review-the-end/comments-2.html)

PPS: I felt cheated: "Over the duration of the series, much speculation was made that the Island was Purgatory or Limbo where the characters all existed after dying in the crash of flight 815. The purgatory island theory was officially denied by the producers. In the series finale, it is revealed that the Flash-Sideways "Timeline", where the uninhabitable Island existed, was the purgatorial limbo existence. (Irony)"
(http://lostpedia.wikia.com/wiki/The_End)
Posted by Yvonne Eve Walus at 11:44 am No comments:

Why are all the literary fiction books out there so dreary? Yvonne Walus investigates and fails to find the answer here.
Posted by Yvonne Eve Walus at 1:55 pm No comments:

Photos from my book launch 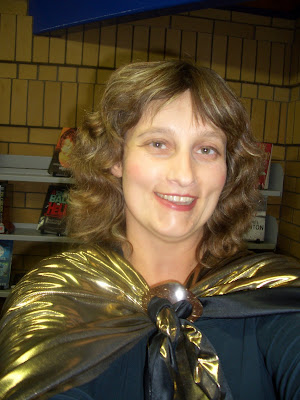 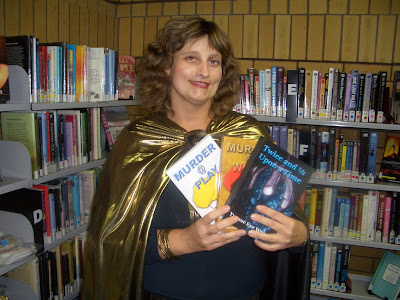 My Stories for Children

Posted by Yvonne Eve Walus at 12:17 am No comments: