The Accidental Further Adventures of the Hundred Year Old Man

Jonas Jonasson has done it again. And just as entertainingly. If you liked "The Hundred Year Old Man Who Jumped Out the Window and Disappeared", you will love the protagonist's views on modern politics: Trump, the Supreme Leader, Angela Merkel, uranium and Kenyan safaris in "The Accidental Further Adventures of the Hundred Year Old Man".

If you haven't read the first book, this one can be enjoyed as a stand-alone. Chances are, you'll read the other one as soon as you've finished this one, anyway. 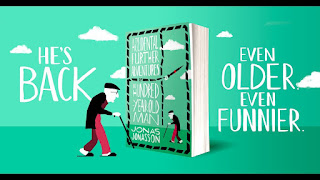 The news on Allan’s black tablet had the curious habit of being both big and small. Mostly big, unpleasantly enough. Allan sought out the small and charming but got the rest of it into the bargain. It was impossible to see the molehills for the mountains.

During his first hundred years of life, Allan had never reflected upon the bigger picture. Now his new toy was telling him that the world was in a dreadful state. And reminding him of why he had, once upon a time, rightly chosen to turn his back on it and think only of himself. He recalled his early years as an errand boy at the gunpowder factory in Flen. There, half the workers had devoted their free time to longing for a red revolution, while the other half was horrified at the threat from China and Japan.

Their understanding of the Yellow Peril was nurtured by novels and booklets that depicted a scenario in which the white world was devoured by the yellow one. Allan did not care about such nuances, and he continued along the same path after the Second World War when brown shirts made brown the ugliest colour of them all. He noticed this as little then as he did the next time people converged around an ideological expression.

This time it was more a longing for something than away from it. Peace on earth was in, and so were floral VW buses and, frequently, hash. Everyone loved everyone else, except Allan, who didn’t love anyone or anything. Except his cat. Not that he was bitter: he just was.

The flowery era of life lasted until Margaret Thatcher and Ronald Reagan took over in their respective realms. They thought it was more practical to love oneself and one’s own successes. But if you insisted on disliking someone it should be the Russians. Essentially there were no other threats, and when Reagan killed Soviet Communism simply by talking about sending missiles from space, it was peace and joy for all, except the half of humanity who had no daily food and the several thousand British miners who no longer had a mine to go to.

The new view was that there was no reason to care about your neighbour; it was enough to tolerate him or her. And people did, until the winds of change blew once more. A bit unexpectedly, perhaps, the brown-shirt ideology made a comeback. Not by way of Germany this time, at least not fi rst and foremost. Or even second and middlemost.

But in a number of other countries it was in. The United States wasn’t fi rst among them, but it soon became the most noticeable, thanks to its recently elected president. It was impossible to say how much he really believed in it: that seemed to change from day to day. But the old adage about doing something yourself if you want it done right wouldn’t suffice: it was time to point out external threats to the white Western lives we all deserved to live.
Posted by Yvonne Eve at 2:09 pm No comments:

A River of Stars

This is a beautiful novel about a head-strong Chinese woman trying to make it in USA against all odds. Written in an easy, original voice, by Vanessa Hua, this story will captivate your heart and imagination. 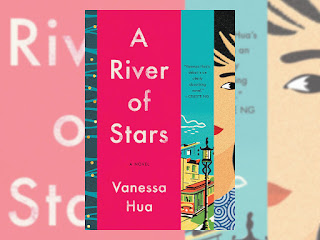 When Boss Yeung first told her about Perfume Bay, she’d tossed the brochure onto the dashboard and reached for a slice of dried mango. Shaking his head, he took the bag, but before he could stop her, she snatched a slice of chewy sweetness. During her pregnancy, he’d begun scrutinizing her, prescribing advice—­some backed by science but most by superstition—­to protect the baby. She shouldn’t eat mangoes, as their heat would give the baby bad skin; no watermelon, whose chill would cool her womb; no bananas, which would cause the baby to slip out early. No water chestnuts, mung beans, or bean sprouts, either. The list of traditional prohibitions grew each time she attempted to eat.As he drifted into the next lane, she told him to keep his eyes on the road. He gripped the steering wheel and told her his plan: he wanted to send her and their unborn child halfway around the world to Perfume Bay, five-­star accommodations located outside of Los Angeles. After she delivered, staff would file for a Social Security card, birth certificate, and passport for the baby. Their son—­his sex recently confirmed—­would give them a foothold in America.“Eventually he could sponsor our green cards,” Scarlett had responded. “For now, you’ll get rid of me. Clever plan, Boss Yeung.”At the factory, she called him Boss Yeung, and she kept it up in private, too, a reminder that she was a deputy manager, and not a xiaojie—­a mistress, a gold digger from a disco or a hostess bar. They passed factories covered in grimy white tile, built on land that had been fields when she arrived here as a teenager. People from around the country had moved to the Pearl River Delta, just across the border from Hong Kong, to make their fortunes, and the factory girl you snubbed might someday become your manager.Boss Yeung reached into the glove box for a brand-­new U.S. atlas that he must have hand-­carried from Hong Kong. Hope unfurled in her chest. She always navigated on their weekend drives, and with this gift, she pictured them traveling across America together.“Whatever hospital you’d deliver in would be top-­class,” he said.“The hospitals are good in Hong Kong, too,” she said. Unlike in China, the government wouldn’t hassle her there for being an unwed mother, wouldn’t fine her or force her to terminate her pregnancy. Women there could have as many children as they wanted.Boss Yeung frowned. Hong Kong was also home to his wife and three daughters.“It doesn’t matter how good the hospitals are in America, if I end up in jail,” she said.

Posted by Yvonne Eve at 1:45 pm No comments: