(actually, I was going to do a philosophical post today, about all the things that irk me and soothe me, but this book just couldn't wait)
"The Blue Nowhere" by Jeffery Deaver is as close as you can get to a masterpiece when writing a thriller.
I confess that I'm biased: my background is in IT and I have a geek fetish (anybody who can dictate a piece of UNIX code from memory using the slash-bang jargon immediately scores 50% higher on his sexy-o-meter), so clearly the topic is close to my heart.
Nevertheless, I found the plotting very good (no quibbles this time about far-fetched twists) and the amount of research humbling (I only found 1 mistake and 1 oversimplification, though I daresay my geek husband will find more when he reads it next week). I loved the major characters, heroes and villains alike - now what could be higher praise than that?
Posted by Yvonne Eve Walus at 2:35 pm 1 comment:

A Kiss For Luck

A dear friend of mine, Melody Knight, has just returned home after a week-long absence.
"You won't believe it," she said, "but a person CAN not-see-the-Internet for 6 days and survive. When you get back, it's all still there."
Well said, Melody. And this one's for you.
Blurb for Melody's new book, A Kiss For Luck (check out the gorgeous cover):

Sybil's fate has been cast in glass for hundreds of years. For centuries, her world has been defined within the contours of an antique mirror. Even so, her dreams haven't changed. She longs for a chance to break free, to live her girlish fantasy of sweet future and warm caresses.

Jamie Perriford is a self-made man, acquiescing to family tradition. He visits Perriford Castle with a rolling of eyes and a satirical twist of his lips. Never was a man so put upon by family, by irrelevant traditions, by pursuit from determined heiresses. Jamie has need of neither a wife, nor interference from the past.

When Jamie encounters Sybil, he is as warmed by her form and unique perspective, as he is by her rather dusty and naive charms. When he takes her in his arms, he realizes that although Destiny may have brought them here, it was A Kiss for Luck that has wooed and won her. If he can only hold fast, he may be lucky enough never to let her go.

http://redrosepublishing.com/bookstore/product_info.php?manufacturers_id=200&products_id=444
Posted by Yvonne Eve Walus at 2:14 pm No comments:

Email ThisBlogThis!Share to TwitterShare to FacebookShare to Pinterest
Labels: blurb

Jeffery Deaver certainly knows how to spin a tale. "The Sleeping Doll" is a page turner, and I know there's a lot I can learn from him about pacing and body language.
I did think, however, that one of the twists was a bit too convoluted for its own good. It felt a bit slapped-on at the end, and it failed my sanity check of "would a person really go to all this trouble to..."
Still, it's a fun book to read, and it certainly kept me off my computer for two nights in a row.
Posted by Yvonne Eve Walus at 2:19 pm 2 comments: 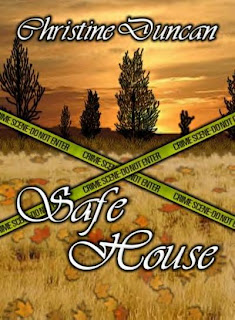 Getting to Know You by Christine Duncan

I have a theory that if I like an author's work, I'm going to like the author. Since I've joined writers groups, I've discovered that the converse is not always true. Sometimes, I might like the author but not like her work. That has been a bit disconcerting to me

So then I formed a new theory. If I wanted to find a new writer to read, I should discover if they have the same general way of looking at things as me. That can involve a lot of networking. Either that, or I spend a great deal less time reading which is unacceptable.

There is a lot of talk lately in author circles about networking. Actually there has probably always been talk in author circles about networking. It used to be the old fashioned kind--in person. Now a lot of networking is on-line and the talk turns to which sites are the most effective. Twitter is one of the newest darlings. I've read articles suggesting that it is possible to get an agent on Twitter, or to find a publisher on Twitter.

I've seen a lot on Twitter--some of it was fun, some of it was offensive (I tend to unfollow anyone who uses too many 4 letter words.) some of it was just....promo. But I didn't get an agent there and I don't think my publisher is on it. I did find a couple authors whose books I want to read--which just goes back to my theory.

You see, I think most of us are like that. We want to get to know each other. If you are a real person on-line--as you have to be in person--we're going to want to read your stuff. But if you are on Twitter or Facebook and all I hear out of you is "Read My Book" and I never hear anything else, I don't feel like I know you. And I'm not intrigued.

I'm still working on a theory of how to be myself on-line. It's pretty difficult not to be a little freaked out about the whole thing when you hear about stalkers on the web, or get lectured about revealing too many details to strangers. It's a fine line.

Still I like on-line networking. I like some of it a bit too much--as many before me have complained, I can spend too much time on it. But I don't really think networking on-line is different than going to conferences or giving talks. In other words, people still want to get to know you.