Fly me to the moon

I read somewhere that your main character shouldn’t be a writer. Nowhere is that more apparent than in Alyson Noel ‘s “Fly me to the moon”.

The novel is your typical chick-lit stuff: a cute sassy heroine by no means glassy or glamorous or gorgeous, a cheating boyfriend, as well as perfect, fun, supportive friends. The plot follows the predictable outline: girl walks away from said boyfriend, girl meets another boy, girl fails to recognise the boy as The One, girl looks for love in all the wrong (but fabulous) places like Paris and Mykonos, girl sorts out the misunderstanding and hooks up with boy.

What attracted me to the book was that they girl was an air hostess - pardon me, a flight attendant - and right there on page one she told it as it is (the gruelling training, the polyester uniform, the polyester aeroplane food). Now that was a world I wanted to find out more about. In that sense, the book didn’t disappoint, and I now have a new respect for flight attendants (not to mention a new fear of flying).

But why oh why did the flight attendant have to turn novelist? That just read too much like an autobiography for my liking.

Still, it was an enjoyable - if fluffy - read. The author has a nice style and her characters are alive, and I’ll probably end up reading her other book too.
Posted by Yvonne Eve Walus at 11:47 am No comments:

Email ThisBlogThis!Share to TwitterShare to FacebookShare to Pinterest
Labels: Alyson Noel, Fly me to the moon, Yvonne Eve Walus

The joy and insanity of being a writer

Northeast Missouri State University, now Truman University, prides itself on offering a liberal arts education to graduates. I got out in four years with a degree in English and a liberal arts education that has garnered me a 15-year career in magazine publishing and public relations/marketing, but my true passion, the "career" I've nurtured since I was about six years old, is writing. And I don't mean journalism. Yes, journalism and editing are what have paid the bills the past 15 years (and will continue to do so), but fiction writing...oh...fiction writing is what has kept me alive.

It's probably going to be the death of me.

Let me explain. If you're visiting this site, you've probably been drawn here by an interest in books or authors or a writer's lifestyle or something along those lines. Let me give it to you straight. All writers have a touch of insanity about us (this is normal). We usually carry a muse around with us, but this is not always by choice. We complain about characters fighting for their rights, refusing to conform to our wishes in a scene. We go on writing binges that keep us up until 3 a.m. before collapsing next to our computers just to get up and start typing again when the sun blazes in to wake us around 7, skipping meals, showers, potty breaks and phone calls until some aspect of reality forces us out of the writing cocoon. We will tear a room to shreds looking for a pen if an idea has just struck us. And woe to the fool who gets between us and a piece of paper when we get hold of that pen...

Because I've experienced the insanity described above, I've been lifted up by hearing stories of people who have enjoyed my first published novel, Choices Meant for Gods. Now I get to read comments on my Amazon.com page of people claiming Nigel Taiman is "by far" their favorite character, or "I want to be just like Chariss when I grow up," and I feel this lump of pride in my darlings rise in my throat.

That's the joy and insanity of being a writer. You pour your heart and soul into the work; and pray that someone out there likes it, too. Now here's the hard part. People have to read it to like it. They have to know it exists to read it. So you have to get it to them.

Enter the marketing and promoting aspect of the new author's job. I attended the ArcheBooks Publishing's Professional Novelist Workshop about two weeks before receiving my contract for Choices Meant for Gods, and had attended the Naples Press Club Writers Workshop the week before that, so I thought I had a pretty good idea of the marketing nightmare new authors faced. I was ready. Lay it on me, I thought.

Now I'm on the last day of a two-month online book tour I organized myself, contemplating repeating a moderately successful instore book signing at the local Barnes & Noble that I organized myself, and managing six blogs (including www.todaythedragonwins.blogspot.com) for the promotion of my fantasy novel that I've organized myself, preparing a spate of press releases I've written myself that I'll spew forth like water from an erupting sprinkler next week, etc. Do you see a trend there?

New authors are on their own. Unless you have the few thousand dollars it takes to hire a publicity firm/PR agency to send out press releases for you, you're on your own. I don't have a few thousand stray dollars and I don't trust people who charge less than professional rates to do a professional job.

I take hope in the fact that even J.K. Rowling was once in the same boat I'm in now. She was down to her last food stamp as the story goes when that fateful call came: Her little story about a boy named Harry Potter had been picked up. I've already had my call. Choices Meant for Gods is published and out there. Now I need my lottery winning event to propel me into J.K. Rowling and Harry Potter status, but, for right now, I'm going to just keep writing deep into the night and reading those fabulous e-mails that praise Nigel and Chariss. Because making a living at this would be nice, but, truly, the writing binges that result in someone singing Chariss's praises are the real joy and insanity of being a writer.


I'd like to thank my host today for posting this guest blog article. And I'd like to thank everyone who made the CMFG Online Book Tour the raging success it's been. You know that paragraph above where I said new authors are on their own? I'd like to correct that. We actually have each other. Without each of you, the name Sandy Lender wouldn't be all over the internet right now, and readers wouldn't be one click away from http://www.amazon.com/Choices-Meant-Gods-Sandy-Lender/dp/1595071652/ref=dp_return_1/104-9089752-5140754?ie=UTF8&n=283155&s=books&qid=1175821346&sr=8-1 to pick up my epic fantasy novel. And new author Sandy Lender is grateful to every one of you.

"Some days, I just want the dragon to win."
Posted by Yvonne Eve Walus at 10:15 pm No comments:

Stephen King’s non-fiction book “On Writing” is a mixed bag. The first part, his autobiography in a series of unrelated snapshots, is riveting. Once you’ve read about his childhood, you can understand where his fiction is coming from. (His background also makes you realise how parenting has grown up since Stephen was a child: I read with horror (sic!) about his various babysitters and about his adventures courtesy of his older brother.) And his struggle with drugs later on in life makes you realise that being a successful writer is not all that it is trumped up to be.

The second part, however, the one about writing itself and how to go about it, contains only pretty basic ideas and lacks the flair of the previous section. I’m sure it’s useful to a beginner writer, though, particularly Stephen King’s permission to be selfish and put writing above all else.

While I’m not about to follow that advice, it’s nice to know I could. Theoretically. Once the kids are asleep and the dishwasher is loaded and my work-for-money work completed and my book publicised and it’s already half past midnight....
Posted by Yvonne Eve Walus at 12:05 pm No comments: 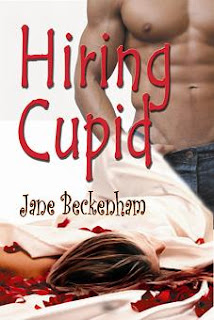 You only need to look at the cover of Jane Beckenham’s “Hiring Cupid” to realise why I couldn’t wait to get my hands on a copy. Even if I didn’t like the story, I reasoned, I could always keep the book by my bedside for ogling purposes.

Still, not to be accused of judging a book by its cover, I read it. Wow. I wish I could write sexual anticipation the way Jane does. Everything in her book sizzles and smoulders and burns with all the colours of passion. I honestly wasn’t sure what was more important: to read on (the plot is great and quite unusual as far as romances go) or to grab a notebook and to steal all the expressions the writer used to heighten the pleasurable tension.

I chose to read on and to worry about honing my own writing skills later (nobody said I’m only allowed to read the book once). And so I followed Carly’s struggle through her very rocky road from sexual paradise on an island to a blissful conclusion. I am ashamed to admit that the surprise twist brought a sentimental tear or three to my eyes.

You can read more about the book here: Hiring Cupid

. Or you can join Jane’s newsletter
http://groups.yahoo.com/group/RomanceauthorJaneBeckenham/ to receive 3 excerpts from the book.
Posted by Yvonne Eve Walus at 4:50 pm No comments:

Interview with a Dragon 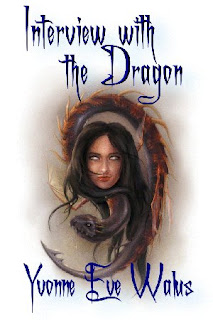 My latest e-book, “Interview with a Dragon”, has just been released by Echelon Press as a July spotlight work.

Says a reviewer: “Witty dialogue and slightly different take on dragons make this an interesting insight into a dragon’s point of view. Humans have feared the idea of dragons from the beginning of time, well, who wouldn’t fear a fire breathing creature with talons and wings. When a journalist visits a dragon in prison for theft, she’s in for a surprise.”

Excerpt:
"Tell me something about yourself." I don't need to fake the curiosity. "What is your greatest desire? Your dreams?"

Humans can never resist that one. She tells me about a house with a Jacuzzi, a holiday in Bali, a press award she's hoping to get with this story. Like with all humans, it's always: I–I–I.
"Now for your article." I move my lips as close to the glass as I dare. "What would you like to know?"
"Everything!" Her face suddenly comes alive, gone is the petrified mouse that started the interview. "Where you come from, are you real, why you chose a life of crime -" she pauses and reddens again, her eyes avoid mine. "I'm sorry. I shouldn't have..."