What is it about the movie BEFORE MIDNIGHT that makes it so good? Yes Ethan Hawke. Yes Julie Delpy. Yes the Greek setting and yes the quirky dialogue and yes the raw honesty of what love looks like after nine years.


But you know what else? It's the assumption that the female characters are all intelligent and they have something to discuss that's not shoes. It reminded me not only of its predecessors BEFORE SUNRISE and BEFORE SUNSET, but also of a Canadian classic, THE FALL OF THE AMERICAN EMPIRE.   Go see BEFORE MIDNIGHT. Twice. 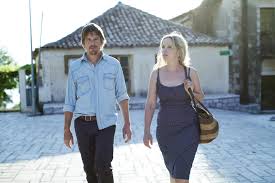 Posted by Yvonne Eve Walus at 10:55 pm No comments:

Email ThisBlogThis!Share to TwitterShare to FacebookShare to Pinterest
Labels: movies

Replay by Ken Grimwood is a novel worth reading. I wonder whether that's where Stephen King got his idea for 22/11/63. Yes, it's about travelling back in time, replaying bits of your life. Personally, I preferred King's version (I could actually see the railway lines and taste the root beer), but I'm glad I read Replay.

Here's what the Wikipedia says about it: "Replay is the account of 43-year-old radio journalist Jeff Winston, who dies of a heart attack in 1988 and awakens back in 1963 in his 18-year-old body as a student at Atlanta's Emory University. He then begins to relive his life with intact memories of the next 25 years, until, despite his best efforts at cardiac health, he dies of a heart attack, again, in 1988. He immediately returns to 1963, but several hours later than the last "replay". This happens repeatedly with different events in each cycle, each time beginning from increasingly later dates (first days, then weeks, then years, then ultimately decades). Jeff soon realizes that he cannot prevent his death in 1988, but he can change the events that occur before it, both for him, and for others."
Posted by Yvonne Eve Walus at 11:32 pm No comments: 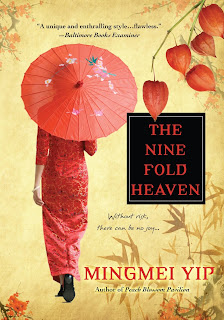 Mingmei Yip has been writing and publishing since she was fourteen years old and now she has twelve books to her credit. Her five novels are published by Kensington Books and her two children’s books are published by Tuttle Publishing. Mingmei is also a renowned qin (ancient string instrument) musician, calligrapher and painter. In Hong Kong, she was a columnist for seven major newspapers. She has appeared on over sixty TV and radio programs in Hong Kong, Taiwan, China and the US. Visit Mingmei at: www.mingmeiyip.com.
Posted by Yvonne Eve Walus at 11:46 pm No comments:

Posted by Yvonne Eve Walus at 1:46 pm No comments: