How hard can it be?

"How hard can it be?" by Allison Pearson is a sequel to the superb "I wonder how she does it". It's about middle-life marriage, mothering teenagers, and getting the job market to understand that 49 is not over the hill.

Kate Reddy is counting down the days until she is fifty, but not in a good way. Fifty, in Kate’s mind, equals invisibility. And with hormones that have her in shackles, teenage children who need her there but won’t talk to her and ailing parents who aren’t coping, Kate is in the middle of a sandwich that she isn’t even allowed to eat because of the calories.
She’s back at work after a big break at home, because somebody has to bring home the bacon now that her husband Rich has dropped out of the rat race to master the art of mindfulness. But just as Kate is finding a few tricks to get by in her new workplace, her old client and flame Jack reappears – complicated doesn’t even begin to cover it.
How Hard Can It Be? is a coming of age story for turning fifty. It’s about so much more than a balancing act; it’s about finding out who you are and what you need to feel alive when you’ve got used to being your own last priority. And every page will leave you feeling that there’s a bit of Kate Reddy in all of us.

The Midnight Line by Lee Child

The Midnight Line by Lee Child, also known as Jack Reacher 22, is as Jack Reacher as you can get. Which is a very good thing. When I sit down to read one of these books, I know my values and morals will be challenged. I know I’m going to be with a guy who is the strong and silent type in a way that’s not a cliché. I also know he’s going to win every fight and bring bush justice unto the baddies. I would probably not want him as a life partner, but I’d love him in my corner in every situation I can think of.

This is how Lee Child writes.

Blurb:
Reacher takes a stroll through a small Wisconsin town and sees a class ring in a pawn shop window: West Point 2005. A tough year to graduate: Iraq, then Afghanistan. The ring is tiny, for a woman, and it has her initials engraved on the inside. Reacher wonders what unlucky circumstance made her give up something she earned over four hard years. He decides to find out. And find the woman. And return her ring. Why not?
So begins a harrowing journey that takes Reacher through the upper Midwest, from a lowlife bar on the sad side of small town to a dirt-blown crossroads in the middle of nowhere, encountering bikers, cops, crooks, muscle, and a missing persons PI who wears a suit and a tie in the Wyoming wilderness.
The deeper Reacher digs, and the more he learns, the more dangerous the terrain becomes. Turns out the ring was just a small link in a far darker chain. Powerful forces are guarding a vast criminal enterprise. Some lines should never be crossed. But then, neither should Reacher. 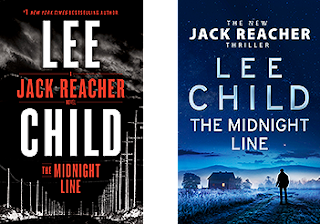