For the vampire lovers/Seducing the Darkness 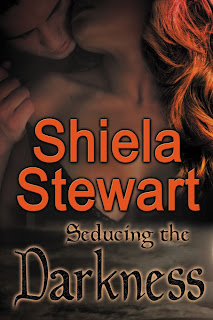 Good day one and all. My name is Shiela Stewart and Yvonne has so graciously allowed me to come onto her blog and share my latests releases with all of you for the next few days. And since the holidays are fast approaching, I decided to play Santa and give away a copy of Seducing the Darkness to one lucky commentor. So keep watching, and comment and on Friday I'll announce the winner.

For those that don't know me, I am a paranormal romance author with eight books under my belt and the ninth to be released on January first. I love anything spooky, suspenseful or with a bite. Which brings me to my latest endevour. The Darkness series.

Blurb:
An outcast by her kind, Trinity Ford has learned how to live on her own. And it isn't easy doing so, considering she is a Vampire.

Once a fragile girl, taken by a powerful vampire prince, Trinity had relied on Basil for support. But finding him in the arms of another woman was more than she could take. On her own, she has decided to protect her city from the predators of her kind that prey on the innocent. Another tough thing to do when you're heart is broken. She's had to learn fast, how to be tough, how to survive, how to stay alive. And she's doing a pretty damn good job of it. Until Basil walks back into her life.

Basil Hawthorn has been the reigning prince of vampires since banishing his father to the Realm of Darkness decades earlier. When his father comes to him in a dream, threatening Trinity’s life, he knows the only way to save her is to push her away. Doing so is not easy, especially when she is the only woman he will ever love.

Rumors in the underworld talk of raising the vampire King and blotting out the sun. Basil knows that if his father rises, he will be put to death for his betrayal. Trinity knows that if the King returns, no human would ever be safe again. Despite the betrayal and the threat, neither can stay away from the other. But can the two work together to stop the Ritual before the King is resurrected?

Or will the darkness capture them both?

That damn itch she’d been having lately was back, and it was driving her nuts. Rolling her shoulders, she watched two redheads staggering from the bar’s exit and towards a dimly lit street.

She kept to the shadows as she followed after them. Uneventfully, they made it to their car and drove off. She hoped the cops were out tonight and those two were hauled in to sleep off their drunk.

Turning back to the club, she waited and watched for the next two hours and was glad nothing had happened. So far. But the night was still young.

She didn’t jump, but slowly looked over at Basil who appeared next to her. She hated when he just appeared out of thin air, but she knew he loved that entrance the best. “Your stink? Always.”

He didn’t sneer at her but slowly lifted his hand and lit the cigarette between his fingers. “The blood of a human. Does it still draw you in, make you hunger, make you want?”

“I’ve got a strong will.” Deliberately, she shifted away from him. It wasn’t only the smoke that bothered her—and always had—but his scent. It pissed her off that he could still make her ache.

She waved the smoke away annoyingly and shifted just a bit farther away. “Why are you skulking, Basil? Because if you’re following me, I am going to so kick your ass.”

“I was in the neighborhood.”

She glared at him and growled her response. “If you’re here to drink, let me warn you now that I won’t allow it.”

“Who am I supposed to drink from now that I no longer am nourished by your blood?”

She chose not to answer that. “Why does it seem that you’re always around, lurking in the dark, around places that aren’t your usual hangouts? Unless….there’s a reason?” The thought stabbed into her, and though she didn’t want to believe it, she had to ask. “Are you trying to take more females of your own? Are you the one abducting young girls?”

With one quick and easy flick, he tossed the cigarette into the darkness. The red tip glowed as it flew through the air before landing on the gravel to bounce and spit out a cloud of red sparkling fireworks. “I will not even dignify that with an answer.”

“It’s so obvious, now that I think about it. I was young when you took me, made me yours. Is that what you’re doing, Basil, making another mate?”

His icy blue eyes narrowed dangerously as he stepped closer. “I have a mate and to think you would even have such a thought sickens me.”

“You don’t have me, Basil.” Her voice grew dangerous. “If I’m so wrong, then do explain to me why you’re always out in the darkness, skulking near all these young girls?”

“The very same reason you are, my dear.” He ran a finger along her face, making her scowl.

She snorted, stepping away from him before he decided to do something stupid, like kiss her. “Please, I hardly think you’re out here looking to find the person or persons responsible for taking four innocent girls.”

Leaning against the building behind them, Basil looked off into the direction of the bar and the people waiting in line to be allowed inside. “You think so little of me and that’s a shame. But I suppose I’ve done it to myself. Yes, Trinity, I am looking to find out who took those young girls, as you are. And why you might ask?” He shifted towards her, sliding in nice and close and making her pulse speed up. He laid his fingers on her cheek, then slowly slid them along her face. “Because I have a feeling I am connected to the reason they’ve been taken.”

She had all but a moment to open her mouth to respond when he closed it with a mind numbing kiss, then pulling away, turned into a dog and scampered away.

Now what the hell did he mean by that?
Posted by Shiela at 3:14 am

Merry Christmas. I love paranormal books and will be looking out for this one. And Yvonne you have a great name (as it is my middle name).

Be sure to check back tomorrow when I'll be sharing the second book in the series, Desiring the Darkness.

Hi Shiela, love paranormal romance stories and like the sound of this series. BTW, great covers.

I love paranormal books and this one sounds great. I also love the cover of this book.
Hope you have a merry christmas.

Thank you Cathy and Lee Anne! I love the covers for my Darkness series too. Nothing wrong with a hunky man on the cover of a book. :)