Fifty-fifty by Steve Cavanagh features the much-anticipated return of Eddie Flynn (Book 5 in the series). Eddie is an ex con artist who is now a lawyer, so not much change of a profession there (with apologies to my aunt, uncle, brother in law, sister in law, and potentially my children). Paired up with judge Harry Ford, they constitute one of my favorite crime fiction duos.

The Eddie Flynn books just get better and better. This one is a perfect combination of plot, character development, topical issues and plain good old storytelling.

Read it. Even if this is to be your first Steve Cavanagh, read it now. You can catch up in reverse order.

Two sisters on trial for murder. Both accuse each other.
Whom do YOU believe?

Alexandra Avellino has just found her father's mutilated body, and needs the police right away. She believes her sister killed him, and that she is still in the house with a knife.

Sofia Avellino has just found her father's mutilated body and needs the police right away. She believes her sister, Alexandra did it, and that she is still in the house, locked in the bathroom.

Both women are to go on trial at the same time. A joint trial in front of one jury. 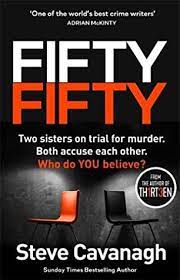 But one of these women is lying. One of them is a murderer. Sitting in a jail cell, about to go on trial with her sister for murder, you might think that this is the last place she expected to be.