Lee Child has done it again - created a masterpiece of a page-turner in NEVER GO BACK.

Now, in a traditional thriller, the reader keeps reading because the hero is in jeopardy, or his world is in jeopardy. The Jack Reacher series is unique in that you never really worry about him. He’s like a super-realistic superhero: his wits, training, experience and sheer physical superiority combined make us trust him to get himself out of any situation. As I mentioned before on this blog, he will figure a way to scale a fence using a water bottle and a piece of chewing gum, or blow up the baddies with a cell phone, or make a helium balloon  into a deadly weapon – and I’m only exaggerating a tiny bit. In fact, the cell phone example is true.

So, as I said, you never have to worry about Reacher. What’s more, the plot of NEVER GO BACK doesn’t rely on a deadly virus being released into the population or an asteroid hitting the earth. So, contrary to all thriller rules, there is no immediate danger. And yet, the way the book is written, you keep on reading. You want to solve the mystery, you want to know how things will work out with Susan (if you don’t know who Susan is, read 61 HOURS), you want to spend time in Reacher’s world.

Lee Child is known for the brevity of his writing style. He can have a page-long conversation full of he said / she said. His descriptions are factual, often with exact metrics, often noting the absence rather than the presence of objects. This usually works well and serves as a Lee Child signature. In NEVER GO BACK, he goes a step further. Without compromising his voice, he adds an extra layer of detail to his narrative, making it easy for the reader to sink into the book with all five senses.

If I had to pick my favourite Lee Child book, it would be this one. 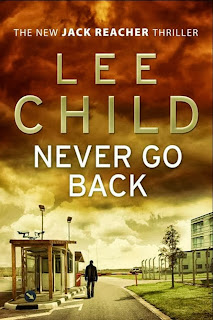 I don't know if I really like the new superhero-cannot-die Reacher. It doesn't assist much for the suspense, but I will admit, everyone of his books is a one-sitter for me. Early last week after having read NGB, I listened to him talking to Elaine Charles from the Book report radio show, and then he admitted to having named his next book already '20 Seconds ago', without much planning as to what will happen - exciting stuff.

I know what you mean. The thing is, though, Reacher is a fantasy. All men want to be like him, and all women want to go to bed with him. And when you read the books, you don't wonder whether he'll win the fight: you wonder how. :-)