Liane Moriarty is an Australian author, so it's no wonder she became known in New Zealand only once Hollywood expressed an interest in one of her books (Big Little Lies). Some of her books are classified as "light and funny", others as "issues books".

The Husband's Secret is definitely an issues book, sad at times, though it's by no means heavy or depressing. It makes you think. It makes you wonder what you'd do if you were one of the characters. It makes you want to join a book club just to discuss it, and it makes you Google the book to see whether other readers have figured out the symbolism.

Oh, and I did like how the book was not actually about guessing the secret: it was revealed pretty early on. 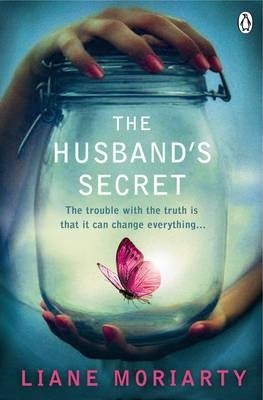 Posted by Yvonne Eve at 2:21 pm No comments: Links to this post

The Jigsaw Man by Paul Britton is a fascinating read, provided you have the stomach for the crime scene descriptions. Despite the fact that forensic psychology can obviously never be 100% (what is?), this autobiographical account of how to solve crimes by understanding the criminal is an important addition to any reader of detective stories.

Blurb:
Forensic psychologist Paul Britton asks himself four questions when he is faced with a crime scene: what happened: who is the victim: how was it done, and why? Only when he has the answers to these questions can he address the fifth: who is responsible? An intensely private and unassuming man, Britton has an almost mythic status in the field of crime deduction because of his ability to 'walk through the minds' of those who stalk, abduct, torture, rape and kill other human beings. What he searches for at the scene of a crime are not fingerprints, fibres or blood stains - he looks for the 'mind trace' left behind by those responsible; the psychological characteristics that can help police to identify and understand the nature of the perpetrator. Over the past dozen years he has been at the centre of more than 100 headline-making investigations, from the murder of Jamie Bulger to the abduction of baby Abbie Humphries, the slaying of Rachel Nickell on Wimbledon Common, the pursuit of the Green Chain rapist and the Heinz baby food extortionist, the notorious Gloucester House of Horror and most recently, the murder of Naomi Smith. Told with humanity and insight, The Jigsaw Man is Paul Britton's absorbing first-hand account of those cases, and of his groundbreaking analysis and treatment of the criminal mind. It combines the heart-stopping tension of the best detective thriller with his unique and profound understanding of the dark side of the human condition. Posted by Yvonne Eve at 12:40 am No comments: Links to this post

The Man in the High Castle - TV series

Too dark for me.

Posted by Yvonne Eve at 2:52 pm No comments: Links to this post 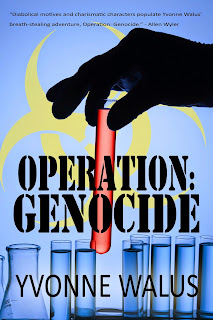 If it looks like an elephant and walks like an elephant, it’s an elephant, thought Captain Trevor Watson.
For some reason, though, the higher powers within the South African Police weren’t buying the wisdom.
He stood at the entrance to the rich man’s garage, the smell of car fumes still tarnishing the night air. He scanned the confined space.
“This exactly how you found it?” he asked Jones.
The pimply constable stood to attention. “Yes, sir.”
To the left side, a Ford Cortina with a teddy bear on the back seat. A silver BMW to the right. An expensive status symbol car for him, a practical one for her, Watson noted. That in itself said something about the dead man. A garden hose extended from the Beemer’s exhaust to the driver’s side window.
They had all the garage doors open now, airing out the interior before proceeding with the investigation.
“Your thoughts, Constable?”
Let the youngster learn on the easy ones.
Jones shrugged. “Looks like a suicide to me.”
“Right.” Did to Watson too, but obviously the brigadier had a different take on it to call him when he wasn’t up on the rotation. Watson knew better than to complain. After last week’s crap-out session, his job was hanging by the proverbial thread, except in his case the thread was thinner than a hair and more brittle than a dry twig from a thorn tree.
Officially, he’d been in the right. A white property owner had the legal right to shoot a black burglar, provided a warning shot had been fired first. The way some policeman worked, they would fire that warning shot themselves when they arrived at the crime scene and found only one spent cartridge. Some policemen, but not him. A week ago, Watson had been called out to a shooting scene: one dead burglar, one shot fired. Only one shot. Instead of fixing up the scene after the fact, he had chosen to obey the letter of the law, arrest the white homeowner for culpable homicide. The result? The guy who shot the burglar without warning got off with a smack on the wrist. Watson, given the history of his employment in the South African Police, came out with excrement stuck to both boots.
Remember whose side you’re on, Watson, the brigadier’s words kept ringing in his ears. One false move. Just one, and you’re finished. I’m watching you.
So. Saturday night, and he’d been pulled out of bed to investigate yet another suicide. Yet another white middle-aged guy whose life of luxury had blown up in his face. Watson remembered the outline of the man’s sprawling mansion, eyed the BMW, tried to understand. No go.
“Word has it he’s some sort of big shot. That right?” Jones swatted at his forearm, brushed off the dead insect. “Bloody mozzies.”
“Far as I know, the victim hasn’t been positively identified yet. Both cars and this residence, though, are registered to a scientist doing classified work for the government. That’s why all sorts of trip wires sounded the alarm the moment the call came in.”
“Live by the sword, die by the sword, hey, Captain?”
Watson waved a mosquito away from his own arm. Shook his head. “It’s not as though the victim…” his memory was still sluggish from the sex marathon he’d had only half an hour before, “this Gordon Pretorius…” He paused, found his train of thought. “Not as though he died of poison, or a bomb explosion, or whatever it is government scientists create in their labs.

(link to the book)
Posted by Yvonne Eve at 11:38 pm No comments: Links to this post